Alastair Lukies, CBE, is a British entrepreneur who founded Monitise and epolitix.com and was recognised as a Technology Pioneer by the World Economic Forum. In January 2014, Lukies was appointed as a Business Ambassador for the financial services industry by the UK Government.

He joined Peter Oakes, founder of Fintech Ireland and one of Ireland’s foremost authorities on Fintech, Financial Services, Regulation, and GDPR for a wide-ranging discussion on Dublin’s place as a global FS hub, Brexit and the future of the financial services industry. Introducing the event, Tracey Carney Managing Director of Business & Finance, spoke about the central place that Dublin now holds as a global financial services hub and how important trust, ethics and a strong core are particularly in the FS industry – which are transferable across all businesses. Kicking off the conversation Peter Oakes asked Alastair Lukies about the importance of diversity and inclusiveness and quoted Geraldine Gibson, CEO of AQ Metrics:

As a CEO I feel strong responsibility for those who come after me to minimise bias and pursue inclusion. I strongly believe that companies should be intentionally designed to be blind to bias. The only way to do this is to change the dialogue at the top.

Alastair in response said about the importance of diversity and inclusion in the FS industry,

That’s why diversity is so important. By working with a collective of people from different walks of life and mindsets you can build solutions and technology that matter to all society and I think that’s something that’s really important. Moving on, Peter and Alastair looked at the ‘fourth industrial revolution’ which will represents a fundamental change in the way we live, work and relate to one another.

I think what’s so interesting about the fourth industrial revolution is it will mean a new set of standards and relationships. Of course it’s driven by technology and we get so excited about it – main frame, blade frame, bitcoin, blockchain – everyone gets excited about the technology but actually it’s just a new era of collaboration.

Lukies explained why Ireland and the UK are well placed to set these standards for the new technology because ‘it’s not just about technology, it’s about rule of law, collaboration and old and new working together to fuse new platforms.’ He said,

If you look at the big trade battles going on in the world, there are two or three huge nations that are focusing on how they win that battle – and that’s not so conducive to setting a new set of standards. And I think the opportunity for us is while that rages and goes on, is that if we continue to collaborate, then you might see that we set those standards for the fourth industrial revolution.

Brexit and the importance of global regulation

The conversation between Oakes and Lukies covered a wide range of topics including Brexit, the importance of global standards and regulation, with Alastair looking at the how the banking industry has changed even since the global financial crisis, and how non-banking entities are moving into the banking space:

The common threat to banks used to be banks. Now you are looking at Amazon, Apple and fintech companies. 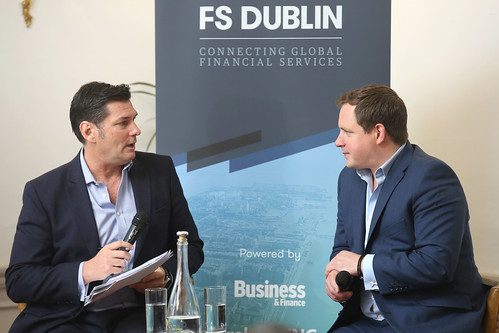