Principals Club Chairman Ian Hyland last night invited a select number of key leaders from business and political life to celebrate ‘leaders in business, technology, innovation and community who have not only captured reality but reimagined it.’

Everyone in this room have challenged orthodoxies – Orthodoxies like ‘the earth is flat’ or there ‘there will never be driverless cars’ or ‘phones have a physical keyboard’ and this year particularly ‘we will never send someone to the moon.’ Tonight we are recognising two individuals who have challenged the status quo and reimagined reality and shaped the world we live in today.

‘You have a responsibility to educate someone else’ Commander Chris Hadfield, who gave a keynote address at Dublin Tech Summit, spoke about his love for Ireland and his awe and appreciation of Trinity College, where his daughter earned her PhD.

Drawing on themes from his speech at DTS he spoke about the importance of not only bettering oneself at all times, but also the responsibility that each and every one of us has to give back and educate ‘at least one other person.’

To go through the library in this school is to walk through one of those places that makes you feel both  small and incredibly privileged. To walk down the aisle of books with the great arch of ceiling above your head you recognise the depth of thought that has led to all the tings that have happened… That feeling of both anticipation but also your own ability. I love the feeling an ancient school like this gives.

He continued, “If you are the lucky recipient of an event like graduating from a place like this (Trinity) or been allowed to do a space walk, then you have a great debt. You owe the people who allowed you to do this thing. And I think everyone here owes at least one other person an education. If you’re not helping one other person directly to become educated, you should be. It’s a straight pay back.” Introducing Jeff Burton, Ian Hyland mentioned how for most people in the room growing up their experience of games would have been as arcade games, until Electronic Arts. He said, ‘It’s hard to imagine that any imagination has not been shaped by Jeff Burton’s ability to see things differently.”

Mr Burton took to the podium and addressed the crowd, touching on his drive to help people reach their personal goals, the power of collaboration and his own involvement with start ups in Europe as a member of the Board of Advisors of Start Up Europe, an EU Commission-based organisation.

Diversity is possible and the cross-fertilisation that is inevitable when you pull together people from different cultures and you combine their thinking is a tremendously creative process and the EU is now engaged in trying to integrate all these centres of innovation and start up ecosystems. It’s very powerful when they can exchange thoughts and ecosystems from other parts of the EU. 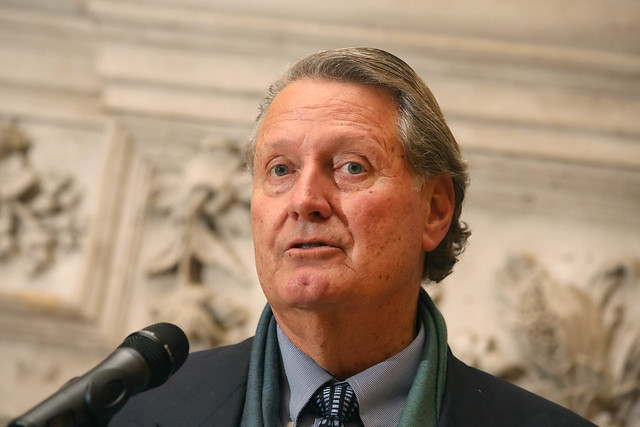