Mario Draghi, former President of the European Central Bank, and Oscar-winning film producer Lord David Puttnam CBE  were among those honoured at the 45th annual Business & Finance Awards, in association with KPMG, in Dublin on Thursday 12th December.

The Business and Finance Awards Programme was established in 1974 and celebrates the achievements of the most outstanding business leaders. Over the past 45 years it has become the longest-running and most coveted business awards programme in Ireland.

The Awards ceremony took place at a gala dinner in The Convention Centre Dublin, on the evening of Thursday 12th December, with over 1,200 of Ireland’s political and business leaders in attendance.

At the event Mario Draghi–who is widely credited with stabilising the Euro during one of the most turbulent periods for the Eurozone–was recognised with the Sutherland Leadership Award, established in honour of  the late Peter Sutherland, former Irish Commissioner to the EU, who was also World Trade Organisation director general and Goldman Sachs international chairman.

The Italian economist served as President of the European Central Bank since 2011, with his term ending on 31st October, 2019, handing over to successor Christine Lagarde. Throughout his term at the helm of the ECB, Mr Draghi was renowned for navigating the complex political landscape within the European Union’s institutions and he succeeded in promoting growth in the Eurozone through an aggressive course of quantitative easing, while championing negative interest rates. It is fitting that in almost half a century of celebrating the theme of leadership, including both the Company of the Year and the Business Person of the Year, that this year’s Business and Finance Awards in association with KPMG also honours Mr Mario Draghi. As one of the most important policymakers of our time, Mr Draghi has played a leading role in European economic affairs over many years.”

Lord Puttnam is perhaps best-known as the producer of Chariots of Fire, winner of the Academy Award for Best Picture in 1982. Other notable films in his vast filmography include The Mission, The Killing Fields and Midnight Express. Together his films have won 10 Oscars, 10 Golden Globes, 25 BAFTAs and the Palme D’Or at Cannes. The multi award-winning filmmaker and Labour peer has called West Cork his home for over 30 years, and travels from there to his seat in the upper house of Parliament in the UK, where he has been vocal in support of the interests of the Republic of Ireland in relation to Brexit.

On receiving his award Lord Puttnam reflected on his strong roots with Ireland and the responsibility of leaders to rise to the challenge, saying:

I’m immensely honoured to be the 2019 recipient of the TK Whitaker Award. Aware that Ken Whittaker played such a significant role in Irish life after the age of eighty, this recognition offers the challenge, as well as the opportunity, to become a genuinely useful citizen to my adopted country.”

Speaking at the event, Ian Hyland, Publisher, Business & Finance, highlighted the importance of celebrating the achievements of global leadership, saying:

In recognising Mario Draghi and Lord Puttnam at this year’s awards we acknowledge their contribution and impact in a global context. To do this in the name of two great leaders, namely TK Whitaker and Peter Sutherland, is a huge testament to their achievements and the magnitude of this global awards programme which is now in its 45th year.” This year’s Business Awards were judged by a panel of 23 high-level representatives from business, academia, media and semi-state bodies—including past winners such as Dómhnal Slattery, CEO, Avolon and Denis O’Brien, Owner, Communicorp—and chaired by Prof Frances Ruane, Chair of the National Competitiveness Council and Former director of ESRI.

Anne O’Leary, CEO Vodafone, received the KPMG Business Person of the Year Award. This Award seeks to recognise noteworthy achievements in business leadership, particularly, those that make a telling contribution to the wider business community in Ireland. Other awards presented on the evening included a new category, the Diversity & Inclusion Award, the FDI of the Year Award, a special ‘Outstanding Recognition’ Award for IDA Ireland which was accepted by Martin Shanahan, CEO, IDA Ireland; and a special ‘Outstanding Achievement in Industry’ Award to Coillte, which was accepted by Imelda Hurley, CEO Coillte.

Gallery of the Event: 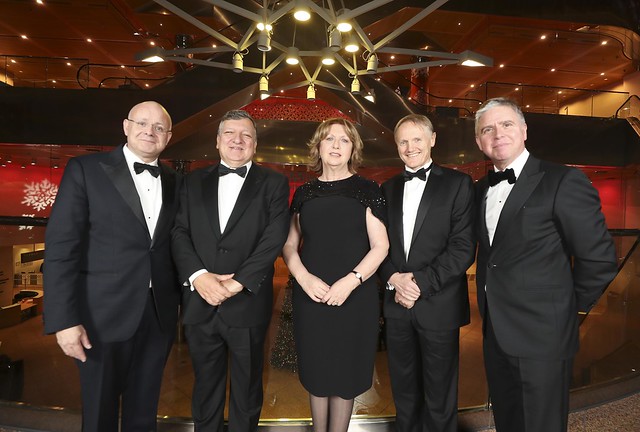