The Principals Club, an international gathering of C-suite business and political leaders, convened at the Merrion Hotel in Dublin to celebrate guest of honour, former Minister for Finance Michael Noonan TD. Speaking about Mr Noonan at the event, An Tánaiste Simon Coveney TD said,  “It’s not an exaggeration to say that…I think he has been more influential over me as a politician than any other person.”

He continued, “I can remember vividly the period of time when he was Minister for Finance during an extraordinarily pressurised crisis for Ireland.”

Minister Coveney described his memories of forming a government in 2011, and the first meeting of the new cabinet in Áras an Uachtaráin, where Mr Noonan outlined, in stark terms, the state of the country’s finances, and the absolute necessity of commitment from everyone in that room to turning it around. The energy and the optimism of Enda Kenny and the calm and wisdom of Michael Noonan steered this country through an extraordinary period of challenge.”

He praised the “coherence and unity” that Mr Noonan helped to facilitate in a time of crisis, predicting it would “mark him down in history as somebody who literally steered the country through a storm, along with Enda Kenny and Brendan Howlin.” Taking to the microphone to speak about Mr Noonan, former Taoiseach Enda Kenny TD joked that “Chatham rules apply” to the anecdotes he would share. He went on to say that:

I believe that Michael Noonan has been one of the finest Ministers for Finance we’ve ever had in Ireland, and it’s not that he’s looking for any note in history to say that, because those who are in politics looking for either praise or credit follow the fallacy of fools.”

He also praised Mr Noonan’s ability to take complex information and explain it clearly, aiding the whole of government to gain a deeper understanding of  the economic issues at stake during an incredibly difficult period. Furthermore, he recalled how Mr Noonan had accepted ownership of the Troika programme and formed a positive working relationship with the Troika which avoided aggressive confrontations, and how he took on “making difficult decisions in the interests of the country”. Mr Noonan began his speech by humbly thanking Mr Coveney and Mr Kenny for the “undeserved but beautiful remarks with which you introduced me”.

Mr Noonan, who was first elected to the Dáil in 1981, remembered his years working with Mr Kenny as his favourite part of his career, calling it “very fulfilling”.

He spoke with fondness of the many friendships he had formed throughout the years, in Ireland and abroad, including Wolfgang Schäuble and Christine Lagarde. Recalling the banking crisis years, he spoke of how the IMF were driving the agenda rather than the European Commission, and he noted, “Their solution always is to cut public expenditure and raise taxes so that you can balance budgets.” He pointed out the problem with that approach is that it takes consumer demand out of the economy, resulting in a loss of confidence, and this led to the government’s decision to run a parallel programme to boost the economy, with resultant VAT rate cuts to boost the hospitality and tourism sector. “We tried to come up with initiatives independent of the programme, so that we had initiatives in each sector,” he explained, noting other examples including a reform of taxes for farmers to encourage the younger generation back to the land. 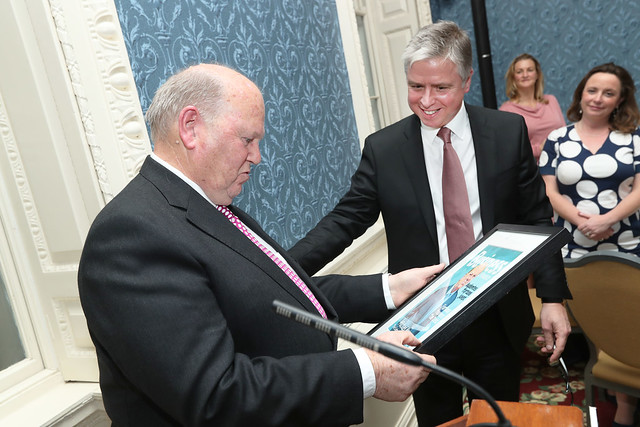